Daniel G. Lugo, J.D., a distinguished higher education professional and inspirational leader known for innovative resource development at some of the nation’s most prestigious liberal arts institutions, has been named the 21st president of Queens University of Charlotte.

Queens Board Chairman Michael Tarwater made the announcement after a unanimous vote by the board of trustees on Jan. 14. “Lugo is the right choice at the right time for Queens,” said Tarwater. “A proven leader in the higher education marketplace for nearly two decades, he has led admissions, recruitment and advancement initiatives at three of the nation’s most selective liberal arts colleges. This includes Colby’s $750 million comprehensive campaign, the largest in the history of liberal arts colleges. Dan’s unique combination of vision and execution is what Queens needs to take it to the next level.”

Lugo will succeed Pamela Davies, Ph.D., who announced in April her plan to retire after 17 years as president. During her tenure, Queens has had record increases in enrollment and a fourfold growth in its endowment, among her many accomplishments.

“To be appointed the next president of Queens University by a board with nationally recognized leadership is the greatest honor of my professional career,” Lugo said. “I could not be more excited to serve as Queens’ next president at a moment when the university has accomplished so much under the visionary leadership of Dr. Pamela Davies. Queens is well-positioned to grow in national recognition and to become an even greater partner with the Charlotte community." 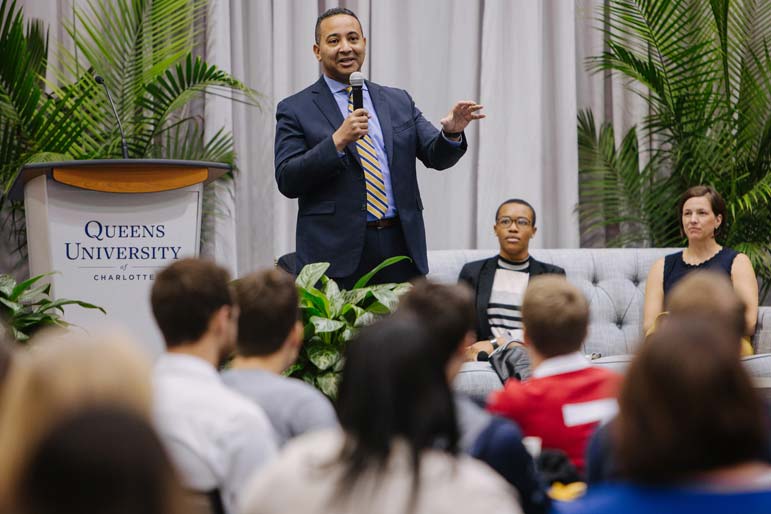 “In collaboration with the university’s exceptional board, faculty and staff, I am excited to lead efforts to educate talented students from every imaginable background who are attracted to this great institution, as the Queens motto states, ‘not to be served, but to serve.’”

A search committee of trustees, faculty, staff and students, chaired by Foundation for the Carolinas President and former Queens Board Chairman Michael Marsicano, worked with executive search firm Storbeck/Pimentel & Associates to find the university’s 21st president. 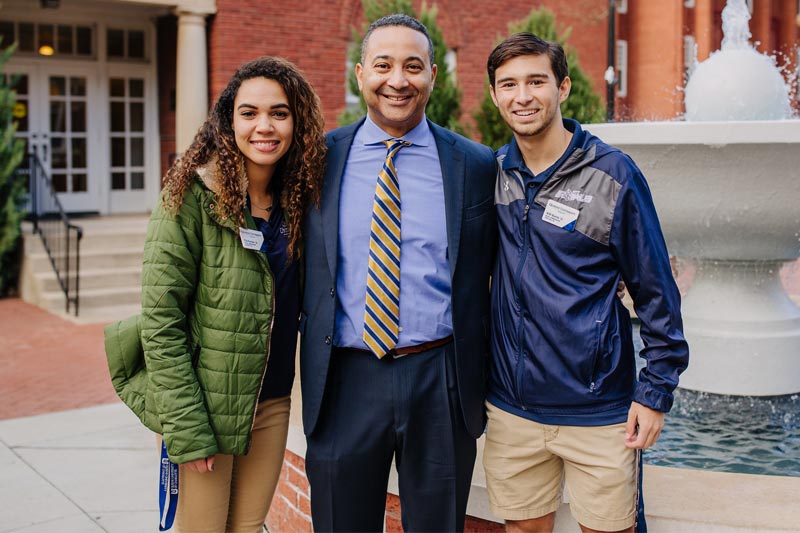 “The extensive, national search yielded an incredibly talented field of candidates,” Marsicano said. “We determined that Queens’ next president needed to be a visionary leader who sees a path to national distinction. It was important to find an experienced executive with proven results in developing resources. Dan Lugo has the skill, experience and talent to build on the exceptional work of President Davies, and grow national awareness of Queens for its educational brand and program excellence.”

Queens history professor Robert Whalen, Ph.D., a faculty representative on the committee, called the choice, “an incredible match of talent and opportunity.” He added, “Lugo has that spark – the spark of leadership, the spark of ideas, and the spark of curiosity. I think he will fuel the faculty and create opportunities for our work to be recognized.”

Senior class president Kayley Marchena ’19 agreed. “He has a contagious excitement about who we are and where we can go. He is approachable, and values students’ opinions. I am excited to see what Queens will look like when I return ten years from now.”

Lugo has been a champion for diversity and inclusion throughout his career. At Colby he co-authored a task force report that became the foundation of the college’s diversity, equity and inclusion strategic plan. Previously, while he served as vice president and dean of admissions at Franklin & Marshall College in Lancaster, Pa., he significantly and simultaneously increased the diversity and academic strength of the student body. As a result, Franklin & Marshall was recognized as one of the “Most Economically Diverse Top Colleges” by The New York Times College Access Index.

“As a first-generation college graduate myself, I am personally invested in Queens’ longstanding and ongoing commitment to diversity and equity, its history of educating and empowering women, and how it lives those values on a daily basis,” said Lugo.

Through his tenure in higher education, Lugo has impressed some of the most visionary college presidents. At Colby, President David A. Greene says, “In Dan Lugo the Queens University community will have a leader of great intellectual depth, unshakeable integrity and rich experience. As strong as he is as an academic leader, and he is truly exceptional, he is even better as a human being. He will be a compelling and compassionate president.”

At Franklin & Marshall College, Lugo worked for then President Daniel R. Porterfield, Ph.D., who is now President and CEO of the Aspen Institute. Porterfield calls Lugo “a hands-on leader who has both the highest ideals for educational excellence and the practical ability to help institutions compete well and achieve their goals. He is committed to working with all stakeholders of an academic community to develop the strongest possible initiatives and value propositions.”

Lugo earned his Bachelor of Arts degree in political science from Carleton College in Northfield, Minn., where he later worked in admissions and development. He earned his Juris Doctorate from the University of Minnesota School of Law, where he was an editor of The Journal of Law & Inequality. Prior to his career in higher education, Lugo practiced law as an intellectual property and entertainment attorney, representing nationally recognized artists in the music industry.

His wife TinaMarie and children Amanda and Michael will join him in Charlotte, where “the city’s welcoming spirit and excitement about its future are a great inspiration to us,” said Lugo. He will assume the presidency on July 1, 2019.