The Oct. 18 installation ceremony culminated a week of festivities honoring Daniel G. Lugo’s  inauguration. The assembly of honored guests and Queens community celebrated the university’s 162-year history and the new president’s official endowment with the power and responsibility of office.

The ceremony incorporated age-old academic traditions including regalia; the procession of academic dignitaries; official greetings; passing of the symbolic presidential medallion; ceremonial music; and the presence of alumni, faculty, staff and students, as well as representatives from other universities. 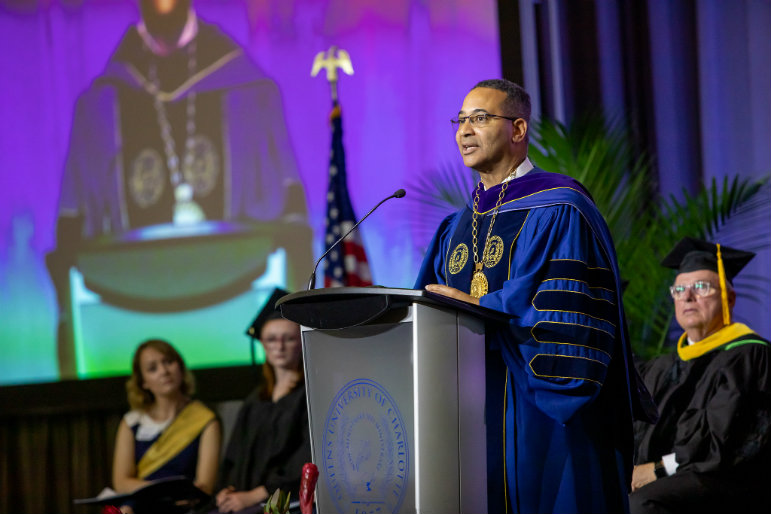 Nearly 2,000 people attended the inauguration which was held in the main arena of the Levine Center for Wellness and Recreation. The processional included robed faculty, delegates and alumni. The stage backdrop featured the university’s historic seal and blue and gold colors.

The formal ceremony evoked Queens’ history and included many stakeholders of the Queens community.

In 1930, Queens College merged with Chicora College of Columbia, S.C., whose motto was transferred to the Queens College seal and remains today: Non ministrari, sed ministrare. Translated from Latin, this means “Not to be served, but to serve.” In 2002, the university seal was updated to reflect the name of the institution, which was changed to Queens University of Charlotte.

Dr. Edwin Walker, president of Queens from 1954-1967, handcarved the mace used in today’s ceremony. The mace is made of dark stained walnut, stands 32 inches tall and has a six-inch disk-head. Around the outside are the words “Sigillum Reginae Collegii (Queens College Seal) 1857,” and the disk itself displays the university motto. Dr. Mildred McEwen was the first to carry this mace as Faculty Marshal during the administration of Dr. Walker.

An ancient symbol of authority, the chain of office worn by the head of a university at formal academic and ceremonial occasions signifies the institution’s charter and right to confer degrees. Queens’ presidential medallion was crafted in 2002 after the institution’s name change to Queens University of Charlotte. The large medallion, plated in 24-karat gold, consists of the university’s seal and decorative tulip surround with an engraved “President” banner attaching it to a large oval chain.

The style of the academic gown varies with the degree it represents. Pointed sleeves are on gowns for associate’s and bachelor’s degrees, oblong sleeves for master’s degree, and bell-shaped sleeves for doctoral degrees. There is no trimming on either the bachelor’s or master’s gown. The gown for the doctoral degree is faced with velvet, either black or the color denoting the academic field in which the degree was obtained. Presidential regalia includes four velvet bars on the sleeve which denote the highest university ranking official.

Here are some academic subjects and their corresponding colors:

The subject of study is indicated by the chevron on the back of the hood. For master’s degrees, the hood is lined in the colors of the institution that conferred the degree and edged in the color denoting the subject matter field in which the degree was obtained. 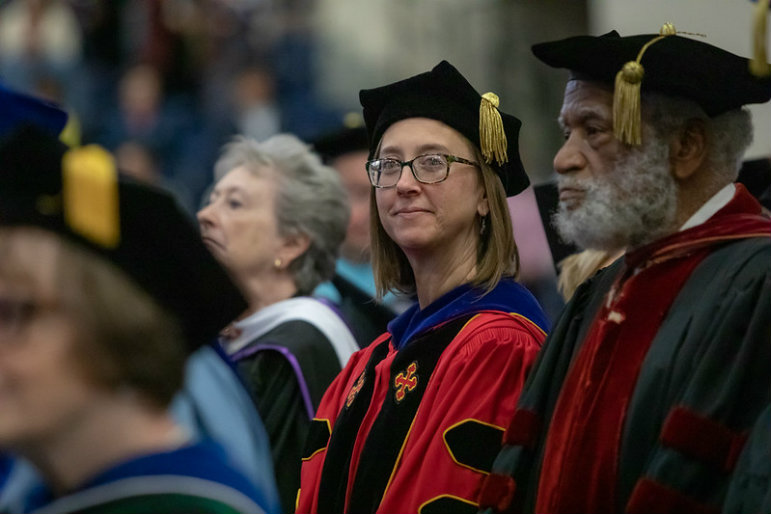