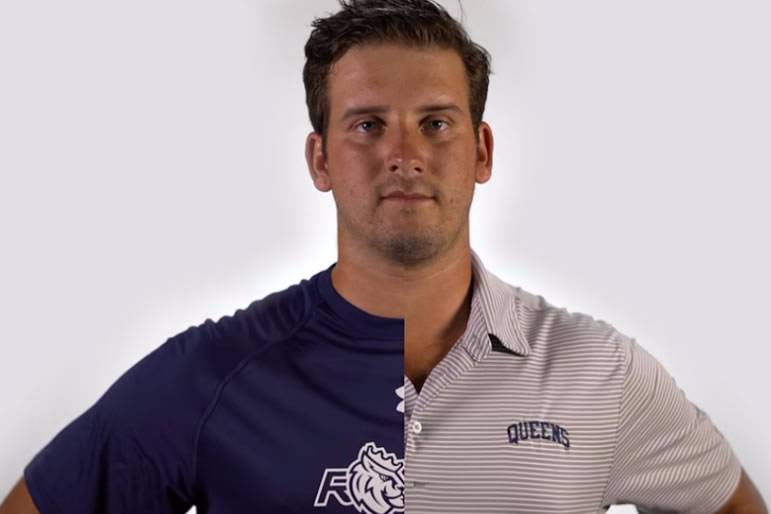 The Royals are enjoying incredible success, adding more championships and new teams each year. Queens is a great place to be a student athlete; our athletes accomplish a great deal on their teams and in their classrooms, with the support of their coaches and professors. Here, you can join a team while still enjoying college experiences like internship and study abroad programs. You don't have to miss out on the full experiences of student life because you want to be an athlete, too. Learn more about our teams on the Queens Athletics website.

“I came to Queens for basketball. I wanted to be a part of a winning program but also I wanted somewhere I could get a great education. I looked into Queens and decided it was a solid fit for me. I love the basketball coaching staff and the training staff, the facilities are really nice. Most importantly, I can get a good education.” - Josh Van Weezep ’18

Queens is pleased to announce the addition of swim and triathlon clubs. These competitive clubs are led by Head Swimming Coach and Director of Aquatics Jeff Dugdale and coordinated by John Long, an All-American, Olympic trial qualifier and Queens school record holder. Long graduated from Auburn University with a bachelor's degree in Exercise Science where he studied high intensity interval training (HIIT) for triathletes. Since then, he has continued to develop his coaching skills by working with Dugdale and former SwimMAC CEO and Olympic Coach David Marsh.

Students who are part of the swim club will have many opportunities to take on leadership, management and volunteer roles at elite competitions such as the Charlotte Grand Prix. The swim club is set to be part of a competitive conference and will compete at the Collegiate Club Championships hosted by Georgia Tech.

The triathlon club was put in place after looking at the rise of triathlon interest over the years. Since 2000, the USAT total membership activity has grown nearly 350 percent and approximately 2,000,000 people participate in triathlons annually. Queens plans to pursue USAT membership as well as membership in the Mid-Atlantic Collegiate Triathlon Conference, a highly competitive conference that includes schools such as Georgetown, Duke, Davidson and UNC-Chapel Hill.

Queens' location is ideal for swimmers and triathletes who will be able to combine cycling and running circuits in Myers Park with the new, state-of-the-art pool in the Levine Center.

"I love the emphasis on the academics of Queens. There is the right amount of athletics, but it was clear that the focus was the academics." -Andrew Fairman '19, Triathlete

Our Marion Diehl Park is a 65-acre sports complex for use by Queens' student athletes and by Charlotte area residents. Conveniently located near Queens' main campus, the Queens Sports Complex at Marion Diehl Park is one of the largest athletic venues in the region. It offers a world-class multi-sport championship field, cross-country course, a grass practice field and a 14,000 square-foot conference center.