Dr. Pamela Davies to Conclude Her Service as President of Queens in June 2019 | Queens University of Charlotte Skip to main content

Dr. Pamela Davies to Conclude Her Service as President of Queens in June 2019 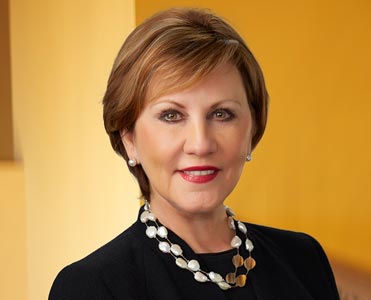 Dr. Pamela Davies today announced her plan to step down as the 20th president of Queens University of Charlotte at the conclusion of the 2018/19 academic year. She will remain in her position until June 30, 2019, or until her successor is in place. After a sabbatical year devoted to research and writing in her academic discipline, Davies will continue to serve Queens as a professor of strategy at the McColl School of Business.

Davies has been president since July 2002, leading the university’s renaissance over the past 16 years. Board of Trustees leaders, led by Chair Michael Tarwater, former Carolinas Healthcare System president and chief executive officer, have been working with Davies to plan a seamless presidential transition that builds on the institution’s momentum and provides continuity of leadership during a critical phase of the 2020 Strategic Plan.

“I have considered it a great privilege to lead this university over the last 16 years,” said Davies in remarks to a gathering of Queens faculty and staff. “Together we have grown our enrollment, expanded our academic programming and strengthened our academic profile. We have raised significant funds to both revitalize our campus and provide the scholarship support that is so greatly needed by our students. All that we have accomplished was made possible by the commitment of those in the Queens community, from faculty and staff to the Board of Trustees, alumni, parents and friends of the university. I am deeply grateful for that support and know you will continue to provide it as the Board leads us through this transition.”

Commenting on Davies’ presidency, Tarwater said, “Pamela personifies the very essence of the institution she leads. She’s an inspirational leader with a powerful combination of business acumen and heart. Her vigorous and disciplined approach to strategic planning set the vision for a remarkable slate of accomplishments over her 16 years as president. I invite everyone in the Queens community to join me in expressing their gratitude for her dedicated leadership.”

A Period of Transformational Leadership

Building on the foundation of the College of Arts & Sciences and McColl School of Business, four named academic units were added during Davies’ presidency: the Presbyterian School of Nursing, the Cato School of Education, the Knight School of Communication and the Blair College of Health. During this period, the university expanded its slate of master’s degree programs and also launched innovative online programs tailored to the needs of adult students.

Davies utilized her substantial expertise in competitive and marketing strategy to lead branding and recruitment efforts that doubled student enrollment. During this period of growth, applications for undergraduate admission grew by 260%, full-time faculty increased from 63 to 127, and the ratio of male to female students increased, all while the university continued to attract high-achieving students. In fall of 2017, Queens welcomed its largest incoming class in university history.

In 2007 the McColl School of Business was accredited by the world’s most prestigious business accrediting body, the Association to Advance Collegiate Schools of Business. The Center for the Advancement of Faculty Excellence was created in 2012 to recognize and nurture the connections between excellent teaching, rigorous scholarship, and meaningful service. In 2017, Queens further cemented its commitment to the highest academic standards when it earned its chapter of the Phi Kappa Phi honor society.

In addition, Queens has been recognized nationally for its work in high impact practices that lead to student success, including internships, learning communities, and study abroad. Student outcomes have continued to surge, with 98% of graduates from the Class of 2016 reporting they are employed or in graduate school.

Under Davies’ leadership, the university expanded its footprint through a strategic partnership with Mecklenburg County that resulted in the creation of a 65-acre sports complex at Marion Diehl Park, one of the region’s largest athletic venues.

Further, more than $130 million of investments in new academic buildings, residential housing and athletic and student recreation facilities combined to transform the campus landscape. The Sarah Belk Gambrell Center for Arts and Civic Engagement, the latest in a significant list of capital improvement projects, will break ground this summer.

Both the expansion of the academic enterprise and the improvements to campus infrastructure were made possible by strong financial support for Davies’ vision in the philanthropic and alumni communities. More than $280 million in philanthropy has been raised over the course of Davies’ presidency.

Since 2002, Queens’ endowment has grown from $30 million to $146 million. The university completed a successful $110 million capital campaign for campus infrastructure in 2011; since that time more than $145 million has been raised to support academic programs, scholarships and additional capital projects. A transformative gift by philanthropist Porter Byrum in 2017 increased the endowment by more than 30% and earmarked critical funds for endowed scholarships.

In addition to enjoying new facilities, at the heart of which is the Levine Center for Wellness and Recreation, Queens’ athletics program has achieved extraordinary competitive success in the years since 2002. Today Queens is a member of the NCAA Division II South Atlantic Conference and sponsors 30 teams. In 2017 the Royals ranked fifth among all Division II programs in the prestigious Learfield Director’s Cup standings for post-season performance. For the last several years, the Royals have led the conference in the number of student-athletes on the Commissioner’s Honor Roll.

In spring of 2018, the women’s and men’s swimming teams took their fourth consecutive national championships, further cementing their dominance on the national stage. Men’s basketball, with a 2017-18 season record of 32-4, completed its most successful season in team history with a berth in the national semi-finals.

In a world where female directors are still scarce, Davies has distinguished herself as a member of a number of corporate boards that span a variety of industries. She currently serves on the boards of Sonoco Products Inc. and the Cato Corporation. In addition, she is a member of the board of advisors for Atrium Health (previously known as Carolinas Healthcare System) and has recently been named chair-elect for the national board of the YMCA.

Her contributions to community service in Charlotte range from being the first female chair of the YMCA of Greater Charlotte to serving on the executive committee of the Charlotte Chamber. She is a dedicated member of her church and was ordained as an elder in 2015. In the academic realm, Davies served as president of the Association of Presbyterian Colleges and Universities and as vice-chair of North Carolina Independent Colleges & Universities.

Among her many accolades for service, Davies has been honored with the Charlotte Business Journal’s Women in Business Lifetime Achievement award, both the John R. Mott Award and the Servant Leader Award from the YMCA of Greater Charlotte, the Excellence in Leadership Award given by the Charlotte Rotary, and the Signor Thompson Community Leader Award. In March, she was honored as the 2017 Charlotte Woman of the Year.

To facilitate the search for the university’s 21st president, the Board of Trustees will form a Presidential Search Committee consisting of trustees, faculty, staff, students and alumni. The committee will be chaired by Michael Marsicano, president and CEO of Foundation For The Carolinas. Marsicano is a member of the Board of Trustees and served as its chair from 2012-2016. The search committee will be aided in its work by the executive search firm Storbeck/Pimentel & Associates.

In discussing the work of the search committee, Marsicano remarked, “Pamela has generated incredible momentum for Queens and built a culture that values collaboration, progress and optimism. We are confident we will find a new leader who will embrace those traditions and lead us in the exciting work of building on the foundation laid by Pamela and the entire Queens community.”