On October 16 presidents from every key segment of Charlotte’s higher education ecosphere met on the Queens University of Charlotte campus to discuss a new vision of higher education for one of the nation’s fastest growing cities. An audience of nearly 500 engaged in the panel discussion and question-and-answer session.

Daniel G. Lugo, J.D., president of Queens University of Charlotte, said, “We want to be a catalyst and help build the alliance between these colleges/universities in a way that will benefit the city and the region. This forum is the first step in that direction.”

During the event, which was moderated by WFAE’s Mike Collins and broadcast the following day on the local PBS affiliate, Lugo said, “We see Charlotte modelling a ‘new normal’ for the higher education ecosphere, thanks to partnership from each key segment: national liberal arts, public university, community college, historically black colleges and universities, and private university/urban setting,” said Lugo.

The group agreed that Amazon provided them with a strong reason to partner. During the internet company’s search for its second headquarters, a cited reason for eliminating the Queen City from consideration was its higher education system.

The candid discussion ranged from broader higher education issues like affordability and bridging the need/skill gap to addressing the unique challenges and opportunities that face Charlotte’s colleges/universities. All agreed that working together was vital.

Deitemeyer said, “This is the first time in my 29-year career that I have been part of a landscape conversation, but it is essential given how the marketplace has changed. Lugo agreed saying, “Having a group of this caliber collaborating to strengthen Charlotte’s higher education holistically is not only unique for the city, but distinctive nationally.”

Listen to the Discussion 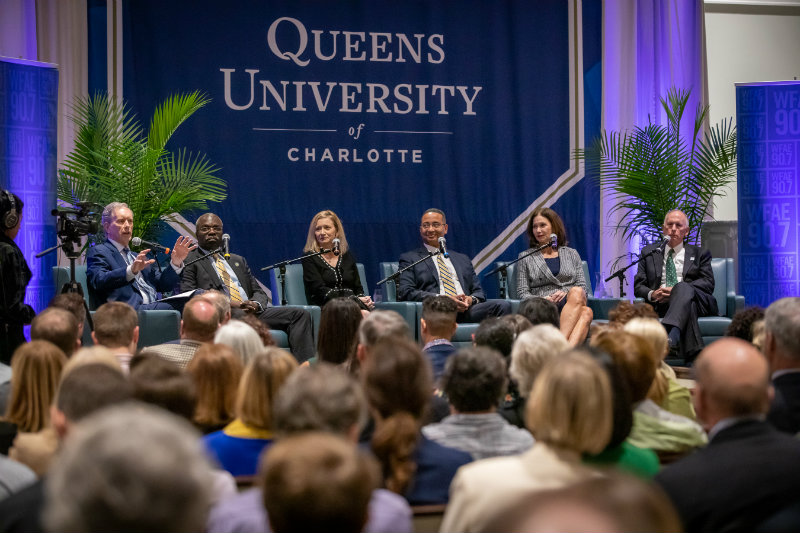