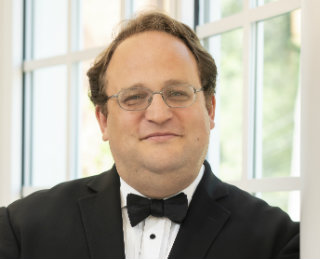 Dr. Justin Smith is an assistant professor of music and the director of choral activities at Queens University of Charlotte. He conducts three choirs and teaches courses in music history and conducting. For six years he was the director of choral activities and holder of the Joseph Naumes Endowed Chair in Music at Marylhurst University in Portland, Oregon. Under his leadership, Marylhurst choirs grew from eighteen to a hundred singers and from one to three choirs.

Dr. Smith is the founder and director of the Portland Phoenix Chamber Choir, which has achieved international recognition. The Portland Phoenix Chamber Choir has won awards at the Cork Festival (2016), the European Choir Games (2017) and the Leonardo Da Vinci International Choral Festival (2018). In 2020, they will appear by invitation at the Northwestern Regional Conference of the American Choral Directors Association in Spokane, Washington.

Dr. Smith is in demand as a judge and clinician. He made his Carnegie Hall debut in April of 2012, conducting the Fauré Requiem for MidAmerica Productions, and again in 2015, conducting the Randall Thompson Testament of Freedom. He conducted the Mozart Missa Brevis in Vienna, Austria in the summer of 2016. He is a scholar of American choral music, having been published twice in Choral Journal on neglected choral works of Marc Blitzstein and Vincent Persichetti. Dr. Smith is a member of the American Choral Directors Association, the National Collegiate Choral Organization and the Oregon Music Educators Association.